Malimbus, the Society's journal, is biannual and bilingual, a unique feature in Africa. It publishes Papers, Short Notes, Reviews, News and Letters and illustrative material covering the field of West African ornithology. Contributions are accepted in English or French.

The NOS publication, Bulletin of the Nigerian Ornithologists' Society, had for some time accepted papers on the birds of other West African countries until, on 17 September 1977 at Liverpool, the NOS Council, wanting to expand the reach of the society, invited French speaking ornithologists (e.g., Claude Chappuis) to discuss the matter and thereupon decided to “westafricanise” the society, and cover the entire West African region. A notice to this effect was published in Bull. NOS 13: 85 (1977), along with a request for suggestions for a new name for the Bulletin. John Elgood put forward the name Malimbus, a passerine genus nearly endemic to West Africa, and this was eventually chosen as the title of its journal. The first issue of the new journal, in 1979, appropriately began with a paper reviewing the genus Malimbus and describing what was then thought to be a new species, the Gola Malimbe. This was later found to be the same as a species recently described from Ivory Coast (M. ballmanii).

West Africa, for the purposes of the Society, had boundaries undetermined at first, but was eventually defined as comprising 28 countries. 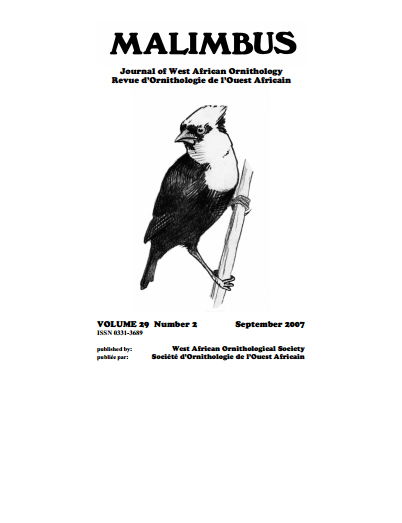