Avian Ecology and Behaviour was an ornithological journal published in 1998–2014 by the Biological Station Rybachy of the Zoological Institute, Russian Academy of Sciences.

The journal was discontinued after publication of volume 25 in December 2014 due to an insufficient number of high-quality submissions. The final volume was available on the website as of April 2015. 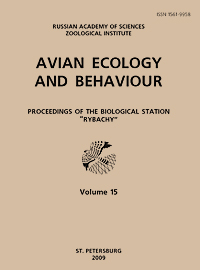