Alula was started in 1995 to promote birding and the knowledge about birds. It was an independent journal for people interested in birds and bird identification. The topics included identification papers by field experts, articles about birding sites, tests of optical equipment, literature reviews, contests, current issues, etc.

Alula was published quarterly and the annual number of pages was about 160. The journal was published in both an English and a Finnish version.

Alula was an ornithological magazine published in Finland. Initially it was published in both Finnish and English, but the final volumes were published in English only. It was aimed primarily at birders with an interest in the birds of the Western Palearctic. The final issue of Alula was issued in 2008 (volume 14, issue 3) after which printing ceased due to financial problems.

The efforts made to improve the magazine quality and content did not increase the amount of subscribers. There are several reasons behind. One part of the old subscribers, mainly abroad, has built subscriber groups which are then sharing one magazine among the group members. Much bigger impact has internet where people can find free of charge good numbers of high quality photos with photo captions. The impact of internet will dramatically increase in the coming years.

Alula board had already in the summer 2008 made a decision to raise our subscription rates for the year 2009. However, we realized that most probably it does not help in the current financial situation. Alula has received substantial support from our advertisers which we warmly want thank for. With the help of advertisers we have managed to keep our prices in a very reasonable level. The amount of advertisements could not be increased comparing to the size of the magazine. Thus the only income increase would have been to raise substantially subscription fee.

Alula staff and supporters have other full time jobs. With current publishing fee level it has been hard to keep all motivated. The need to increase publishing fees has been evident but Alula has not been able to pay more. We want to thank all Alula staff members and supporters who have made possible to publish the high quality Alula birding magazine until now.

We have received in the past years lots of good feedback for the magazine high quality articles. The decision made two years ago to focus on Alula’s content has been towards correct direction. Alula birding magazine has been important channel for Finnish birdwatchers to publish articles in an international forum.

We are very sorry for Alula subscribers for the decision to stop Alula publishing unexpectedly. We want to thank you for your interest towards Alula birding magazine in the past years.

Thanking for your cooperation, 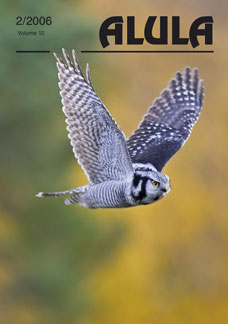